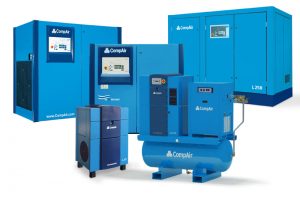 Compair Compressors, now owned by compressor giant, Gardner Denver is one of the best known compressor brands in the UK and Europe and a popular choice with our customers looking for an efficient and reliable source of compressed air. The applications for these neat blue machines are endless and their small footprint makes them ideal for locations where space is limited.

CompAir’s expertise stretches back two centuries and continues to be at the forefront of the compressed air industry today with a truly global presence. With energy efficiency as a core focus it’s no wonder these compressors are so popular with our customers.

Over 200 Years in the Development of Compressed Air

Compair was formed of several existing brands and this has allowed the company to draw expertise from several areas and progress the technological development of compressed air. This commitment to development has resulted in Compair Compressors being among the most energy efficient on the market. With the emphasis on energy efficiency and environment impact becoming ever more current for industries today Compair machines are always a popular choice.

Compair became part of Gardner Denver’s Industrial Group in 2008 where it has continued to flourish and grow in its global presence and popularity. Alongside Gardner Denver they have continued to be at the forefront of developing new technology and have launched several ground breaking variable speed compressors including the Quantima and Ultima which have been well received by the compressor community and customers alike.

With Compair Compressor having such a huge global presence in such a wide variety of applications it is unsurprising that their product range is both extensive and all-encompassing. Customers have the benefit of a huge choice of compressors which vary in size and CFM to suit the intended application, there is a range of both lubricated compressors which are popular in many industrial environments and of Oil Free compressors which are well suited to the Food and Beverage industries. In addition there is a comprehensive range of air treatment products as well as air management solutions.

For customers wanting to build an efficient, reliable and comprehensive compressed air system, Compair really can provide it all.