Ace Are Cream Of The Crop

The dairy industry has come a long way since its humble origins of a stool and a pale. Today dairy farms are examples of modern innovation with rotating milking parlours, robotics and computerised systems. Herds 600 strong can be milked 3 times a day with the push of a button, allowing farmers to supply the demand of the consumer market. The industry also faces some modern day challenges with the boom of dairy alternatives and looming Brexit. With prices dropping fifty percent and a glut of excess milk being produced due to changes in exportation, it is paramount for dairy farmers to run cost effective parlours to maintain a profitable business.

We spoke to Adam Coar of Coars Country Store, who supply and install DeLavel milking parlours to all scales of dairy farm in the North of England. Smaller farms tend to rely solely on the vacuum systems used to extract the milk to power their automated machinery, larger farms however, can benefit from the use of compressed air to control their cow gates and other aspects of the parlour. Larger farms can sometimes boast a herd 600-2000 cows strong and milking up to three times daily can be an arduous task. Coars work with farmers to find effective solutions to reduce milking times and make the process much less laborious. With some of the more sizeable establishments turning to compressed air, Coars have looked to The Ace Group to supply and install compressors and downstream equipment.

One such farm in the North West were in need of an overhaul on their milking parlour. With a large herd and milking 3 times a day it seemed to be a never ending task. Coars were able to step in and install a 50 point DeLaval Rotary Parlour which vastly reduced milking times from 5 hours to just 2. With a system that used compressed air it was imperative that the compressor ran at optimum efficiency and that break downs were prevented.  Machines with high run hours produce large amounts of condensation when the moisture in the air is compressed. Even a small compressor can produce over 7000 litres of condensate in just one week! The Ace Group were tasked with installing a dryer to ensure the compressor could work around the clock without breakdowns. We selected a refrigerant dryer suitable for the farm environment which is now operating to maximise the efficiency of the compressor and minimise the risk of a breakdown. With many farms upgrading their parlours it is likely that compressors and downstream equipment are going to become a necessity in the smooth running of a dairy business.

The below table shows an example of the condensate build up even in a small compressor both with and without dryer treatment. 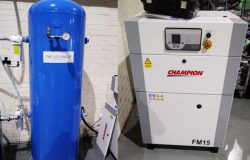 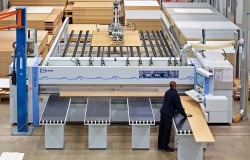 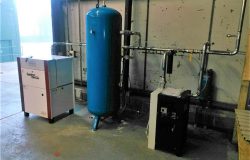 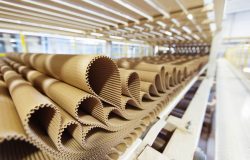 ACE Are On A Roll At Greater Manchester Cardboard Mill

Made in Yorkshire Expo 2019